EmpoweringSA: STATE OF DISASTER NOW A DISASTER OF A STATE 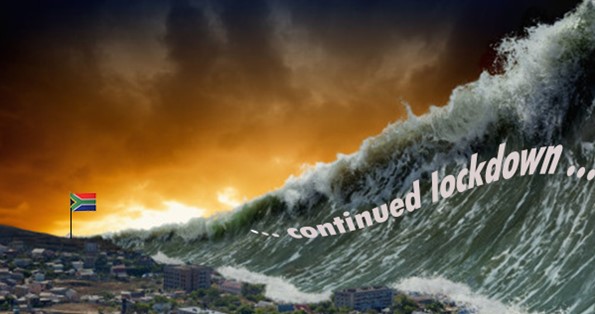 STATE OF DISASTER NOW A DISASTER OF A STATE

The talking has been done:

it is time for strong, effective action from our government

As the Covid-19 lockdown destroys the SA economy, everyone is looking to the state, which had imposed it. The state needs to step in, but the demands are huge and they are growing.

The economic and social impact of the lockdown is far greater than many had expected, with about 3-million jobs already lost amid predictions that this could rise to 7-million in a country that already has one of the highest rates of unemployment in the world.

The pandemic has pushed SA’s economy into its biggest slump in a century, and it is forecast that it will contract by anything from 7% to double digits this year. What started off as a state of disaster is now a full-blown crisis. It is time for action to mitigate the damage.

The economy must be opened up again — obviously with basic health protocols in place — and the bans on the tobacco and alcohol industries lifted. The tourism sector must be allowed to revive itself. These businesses, which contribute significantly to SA’s fiscus and employment, cannot afford to remain in perpetual limbo.

The pressure has been mounting on President Cyril Ramaphosa from all quarters to do this, and with the national state of disaster ending on Sunday, he has a few days to announce the way forward.

The remaining lockdown regulations are hobbling important parts of the economy, and keeping them in place will worsen the situation. The state is going to have to cough up more money it doesn’t have to keep many businesses afloat.

Earlier in August Bloomberg reported that the country has already lost more in tax revenue in the first three-and-a-half months of its fiscal year than it borrowed from the IMF and African Development Bank (AfDB) combined.

The government set aside R500bn for an economic and social relief package to help those affected by the lockdown, including schemes to help businesses and employees that were forced to close their doors because of the regulations. But that money is going to dry up soon.

One of the biggest interventions has been the Temporary Employer/Employee Relief scheme (Ters), which was envisaged to cover April, May and June. A total of R40bn was set aside for Ters, and to date the Unemployment Insurance Fund, which funds the scheme, has paid out more than R39.7bn to just more than 9-million workers.

However, according to a progress report the applications of almost 1-million more people who applied for the relief scheme have been rejected. While the UIF has almost reached its target of paying out R40bn, the process has been slow, with many workers still waiting for payment of their April, May and June applications.

It is now August and a six-week extension of Ters has been granted, until the 15th, but those applications are opening next Monday. The whole point of such a relief scheme is to provide money to struggling citizens at a time when it is most needed, yet people have had to wait months to receive anything, and the situation is getting worse, not better.

Other relief schemes have been moving at an even slower pace, with the state battling to provide what it promised. Business Day reported that more than three months after launching a R200bn scheme to help businesses hit by lockdown with rent and salaries, R13.26bn or 6.6% has been paid out. This is after Ramaphosa had announced that it was expected to support more than 700,000 firms and more than 3-million employees.

By August 1 23% of 39,677 applicants — about 9,125 businesses — that had applied for loans from the scheme had been granted relief. This amounts to 1.3% of the companies Ramaphosa said would be helped, and brought relief to a similarly tiny fraction of those who had lost their jobs.

The tourism department also set aside R200m — a pitiful amount compared to what the sector contributes to the economy — in Covid-19 relief funding for businesses, but two weeks ago tourism minister Mmamoloko Kubayi-Ngubane said of the 7,284 valid applications for assistance that the department only had enough resources to help 4,000.

It is obvious that there is not enough relief to go around and the time to talk about economic recovery has come and gone. We now need action. The lockdown has served its purpose, and as infectious disease specialist Shabir Madhi, a member of the ministerial advisory committee on health says, the regulations are not going to make the difference, the behaviour of citizens will.

If the remaining 20% of the economy is not opened the state will have to drum up more money for relief, which it does not have. The longer this type of dependency continues the more likely it is that the damage will become permanent.

SA is already a welfare state in which millions of people depend on social grants to survive. We can’t afford to have formerly taxpaying businesses and citizens now also living on benefits. People need to be able to make money and contribute to the tax coffers if we are to claw ourselves out of the gigantic hole our economy has fallen into.