Mandatory vaccinations in the workplace: Freedom of choice 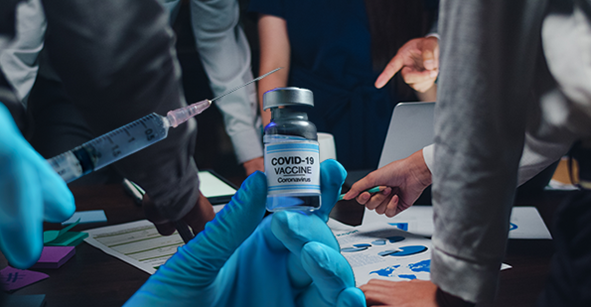 by Gerhard Papenfus and Jaco Swart

In this opinion piece:

The recent decision by some countries to enforce Covid-19 vaccinations on its citizens by restricting travel, access to certain venues or restrictions on the right to work, has placed the issue of mandatory vaccinations squarely in the spotlight.

Although the South African government has indicated that it does not intend to make vaccinations mandatory, it may have already taken a step in that direction, by virtue of the Consolidated Direction on Occupational Health and Safety Measures in Certain Workplaces, issued in terms of Regulation 4 (10) of the regulations made under Section 27(2) of the Disaster Management Act, 2002, (‘the directive’), which was published on 11 June 2021, which permits employers to enforce vaccinations in the workplace, subject to certain conditions.

In terms of this directive, every employer, excluding those who employ 10 or less employees, had to, within 21 days from 11 June 2021, indicate whether or not it intended to make vaccinations compulsory in the workplace and, if so, had to identify those employees who, by virtue of the risk of transmission through their work or their risk of severe Covid-19 disease or death due to their age or comorbidities, must be vaccinated.

The directive contains no indication as to the consequences for an employer who failed to make this election within the 21 days period, which has long expired. It is also unclear which sanction, if any, would befall an employer who has not made such an election, or whether employers may still do so after the expiry of the period.

This, seemingly innocent, direction holds a number of potential legal and moral ramifications within the context of the infringement of individual rights and the termination of employment where an employee elects not to be vaccinated.

The most obvious infringement of rights can be found in sections 12(2) and 15 of the Bill of Rights, as contained in the Constitution, which deals with the right to bodily integrity and the right to freedom of religion, belief and opinion, respectively.

There can be little doubt that mandatory vaccination infringes on these rights and this much is also acknowledged in the directive itself. Accepting this, two questions arise:

1. Does the directive amount to mandatory vaccination, thereby infringing on fundamental rights?

It can easily be argued that the Government has done no more than to require an employer to decide whether or not it will implement a mandatory vaccination policy in its workplace. However, there are two underlying issues which warrant attention.

The first is that, in terms of Occupational Health and Safety Act (OHSA), there is a general obligation on an employer to:

Therefore, should an employer decide not to implement mandatory vaccinations, it may well be argued that it has fallen foul of its obligations in terms of the OHSA, and may face penalties which may include fines and imprisonment. If this is so, does an employer really have any ‘free’ choice in this matter as it is left with a choice of either being non-compliant with the OHSA, or implementing mandatory vaccinations?

Secondly, despite the fact that the employer has mandated vaccinations, the directive allows an employee to elect not to be vaccinated, based on the aforementioned constitutional grounds. However, it is clear from the directive, in particular Annexure C thereto, that an employer may be able to terminate the services of such an employee. Therefore, yet again, what are the choices for an employee?:

This does not seem like much of a choice at all.

It is therefore arguable that the Government is, at least indirectly, attempting to introduce mandatory vaccinations in the workplace. If this proposition is correct, the second question is whether such infringement on constitutional rights can be justified?.

2. Is this infringement or limitation justifiable?

The basic principle is that these rights are not absolute and may therefore be limited. However, in terms of section 36 of the Constitution, such limitation may only be implemented in terms of a law of general application, and subject to the requirements that the limitation must be reasonable and justifiable in an open and democratic society based on human dignity, equality, and freedom.

The first question is whether this directive is a law of general application?

Since a wide interpretation is afforded to the concept of ‘a law’, there can be no doubt that this directive is a law. However, a question arises as to whether it is a law of ‘general application’.

A law of general application means a law that is applied equally and which is not arbitrary or aimed at specific individuals. This question should be examined within the context of the directive permitting, possibly requiring, mandated vaccination. The directive requires employers to firstly decide, if they indeed have a choice, whether they will be implementing mandatory vaccinations, and if they should do so, “to identify those employees who by virtue of the risk of transmission through their work or their risk for severe COVID-19 disease due to their age or comorbidities that must be vaccinated”.

It is therefore clear that a blanket approach of vaccinating all employees is not envisaged.

This requirement must also be viewed within the context of all the other requirements that had already existed prior to the inclusion of the mandatory vaccination principle. These include, social distancing measures, wearing of masks, daily screening,  screens between employees, provision of sanitizers, shifts, rostering and remote working (to minimise the number of employees in the workplace) and accommodation of vulnerable employees, which can include any or all of the above.

The vaccination requirement may therefore only be enforced on those employees who could not be accommodated, by virtue of the existing regulations, or who, assumingly, have not been permitted to return to work due to the abovementioned directives and limitations.

Consequently, it seems that this ‘law’ is aimed at a very specific and limited group of individuals and therefore cannot be said to apply equally, or to be a ‘law of general application’.

This, in itself, may well render the directive unconstitutional.

Further to this, in order for a law of general application to justifiably limit a fundamental right, all relevant factors must be taken into account to determine if the limitation is justified. Among the factors are:

The purpose of the limitation

It is unclear what the purpose of this limitation would be. If the purpose is to safeguard the South African community by virtue of mandatory vaccinations, it is difficult to see how this limitation of fundamental rights would achieve this, as it applies to a very narrowly defined group of individuals whose vaccinations would contribute very little to Government’s vaccination drive.

If the purpose of the directive is to allow business to return to normal operations and functionality, then surely, an employer who elected to vaccinate the ‘identified’ employees, would have to vaccinate its entire staff complement and should no longer have to comply with the remainder of the restrictive regulations. However, this is not the case.

The nature of the right

The nature of the right to bodily integrity is a fundamental right and, although not absolute, may only be limited in very narrow circumstances. The limiting directive is both unclear in purpose and narrow in application and the purpose will therefore, in any event, not be achieved.

Therefore, it cannot be said that a valid or achievable purpose for the limitation of the fundamental rights exists.

The relationship between the limitation and its purpose

The relationship between the limitation and its purpose relates to the proportionality of the limitation. It requires a weighing up of the extent of the violation, against the purpose it aims to achieve. The infringement of a person’s bodily integrity is, without a doubt, an extremely serious violation of a fundamental right. As set out above, it is unclear as to what exactly this infringement aims to achieve, and the seriousness of the infringement of a person’s bodily integrity far outweighs any perceived benefit the limitation of rights will bring about and is consequently disproportionate.

Are there less restrictive means to achieve the same purpose?

There also possibly seems to be less restrictive means to achieve the same purpose, by virtue of the numerous regulations and safety protocols, which employers are already obligated to implement.

The real issue is that, to receive a vaccination or not, should be the choice of each individual, and the rights to bodily integrity and freedom of religion, belief and opinion, cannot be justifiably limited under the circumstances set out in the directive, where the motive, purpose and efficacy of such limitation is difficult to discern.

A further danger for employers is that the directive itself, and the Labour Relations Act, creates an excessively heavy burden that employers would have to discharge, in order to prove the fairness of a dismissal under these circumstances.

We have already, in a previous communique, indicated some of the pitfalls involved in a dismissal of this nature.

It therefore seems that it will be extremely difficult for an employer to justify the limitation, which it is indirectly forced to effect, should it be challenged on constitutional grounds, or to prove the fairness of the dismissal.

Government has created the situation, but employers will be left ‘holding the baby’.

Gerhard Papenfus and Jaco Swart is the Chief Executive and National Manager of the National Employers’ Association of South Africa (NEASA) respectively.