MUST READ: THE ANC’s LATEST PLAN FOR “THE RECONSTRUCTION AND RECOVERY OF THE ECONOMY AND THE COUNTRY” “… IF ONLY ….” by Gerhard Papenfus 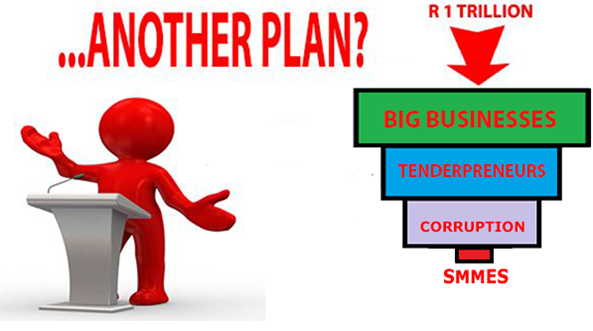 THE ANC’S LATEST PLAN FOR

“THE RECONSTRUCTION AND RECOVERY OF THE ECONOMY AND THE COUNTRY”

On 15 October 2020, the President presented to the Joint Houses of Parliament the plan for the reconstruction and recovery of the economy.

Since 2007, there have been many plans. It has not, as a result of vested interests and ideological confinement, led to anything fruitful.

Before dealing with the plan itself, the ANC needs to be reminded that the Coronavirus, which will, for the next few decades, serve as their excuse for South Africa’s economic woes, did not cause this great hardship and suffering; it was their handling of this blown-up health scare that caused it. The world is waking up to this false narrative and we will one day look back at this as one of the greatest shams in history.

The problem with this plan, like the many before it, is that, although it contains new words, new projects and even perhaps a few new ideas, the underlying ideology and role players, which caused the previous plans to fail, remain unchanged.

However, the difference with this plan, is that big money is thrown at it, which will be of interest to those who stand to benefit, both financially and ideologically.

This plan is the result of deliberations at the National Economic Development and Labour Council (NEDLAC). It is there that the social partners in NEDLAC, big business and COSATU affiliated trade unions, make plans, but plans that ensure that, whatever comes out of NEDLAC, will not in any way prejudice their vested interests. NEDLAC’s advice is partly to blame for South Africa’s low growth and high unemployment rate.

One can almost see the stakeholders in NEDLAC gleefully rubbing their hands together for the R1 trillion infrastructure program that is in the pipeline. The big business representatives around that table will ensure that the lion’s share of the spoils is channelled in such a way that it will, somehow, be to their advantage.

The creation of 800 000 jobs is nothing to be excited about. It emphasises the rather sad state of affairs we find ourselves in. These jobs, which will be paid for by the taxpayer, will add more ‘fat’ to the already bloated, unproductive public service. It is not sustainable; it is a desperate attempt to create jobs in an environment not conducive to job creation – the creation of real and sustainable jobs can only be accomplished by the private sector.

The President mentions in his speech that large-scale interventions “driven by the state“ and social partners have proven effective in many countries that have faced devastation from wars and other crises. There are many examples of that: Germany and Japan, after the Second World War, and many other Asian economic miracles.

South Africa, however, in its current state, is not like those ‘many countries’. There are many obstacles in our way if we want to imitate these nations. The ANC probably knows what enabled those nations to rebuild from scratch, to become economic powerhouses. What the ANC now needs to do is to cast off its ideological obsession and utilise whatever it can from these success stories.

The ANC’s plan suggests support for a “massive” growth in local production. Local production does not just happen. Localisation is more than just a slogan. It is, among others, the result of a policy framework that enables manufacturers to produce the best quality products at the best price. If we can’t produce that, it will simply open the gates for imports; for the consumer, best quality at the best price will always enjoy preference over local sentiment. That may sound harsh but that is the reality.

The plan envisages focusing on the development of small, medium and micro-enterprises. This is not new. Government, however, now has to recognise why this “greatest potential for growth, employment and fundamental transformation” remains untapped. Professor William Gumede of Wits University hit the nail on the head when he said that BEE has “crowded out genuine black entrepreneurs and killed the development of an entrepreneurial spirit in the black society because all you need to secure a BEE deal … is the right political connections”.

Why go through the agony of starting something from scratch, something each and every entrepreneur has to go through, if BEE makes it all so easy and even guarantees spectacular wealth?

According to the plan, if SA can manufacture 10% of what we currently import, if we can supply 2% to the rest of Africa of what it currently imports from outside the continent, if we were to succeed in attracting R 1.2 trillion in new investment by 2023, if we can do all of the above, it will add 5.7% to our annual GDP. It’s all subject to a lot of ‘if’s’. It reminds me of the saying “If we had porridge, we would have had milk and porridge, if we had milk”.

South Africa, however, can do better than what the President imagines. If a business environment is created which is conducive to all business (not just “a handful of politically connected politicians, trade unions and public servants” according to Professor Gumede) and not only the monopolies represented in NEDLAC; if the trade unions’ grip on business and the state in NEDLAC is broken; if the trade union’s grip on education is broken; if we can break the spirit of entitlement, if we can be wise and brave enough to scrap BEE, if we can eradicate crime and corruption, if we can restore investor and business confidence, we can do much better than the 5.7% the President talks about.

But that is if the ANC can break from the mixture of exclusive enrichment, race-based and socialistic ideological chains. If they can do that, we will prosper. If they don’t, our steady decline will continue.