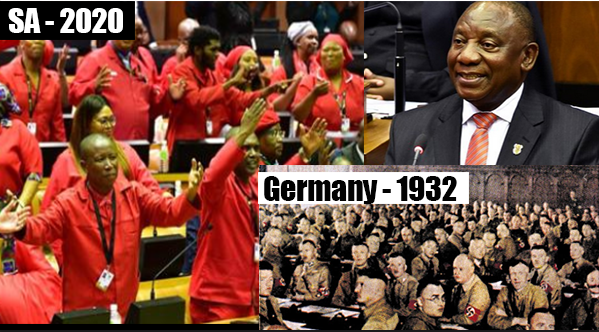 Last night’s events were a true reflection of the state of this nation. Not only is the ruling party, and its president, incapable of managing the crisis, they probably do not perceive it to be a crisis. The speech of the President has once again shown that, even if the ANC, to some degree, understands the nature of the deepening crisis we find ourselves in, they succeed in not showing it, neither do they offer any solution.

The ‘highlight’ of the evening was the behaviour of the EFF.

• firstly, they are a bunch of mindless anarchists, which, if allowed to prosper, will plunge the country in deep despair. Their behaviour reminds one of the behaviour of the Nazis in the German Reichstag at the time of Hitler’s rise to power;

• further, the weak and hesitant ANC has no answer to that. In fact, deep down, some of them, even support both the EFF’s behaviour and their policies; and

• lastly, the EFF actually flourishes under the ANC’s policies and style.

Apart from the President’s statement on Eskom, which deserves comment on its own, he did not, in any way, address the underlying causes of the crises in municipalities, water and sanitation, health, education, unemployment (in particular the 70 percent youth unemployment), ‘land reform’, low business confidence and low economic growth.

The crisis in South Africa can be compared to Britain’s crisis facing Nazi Germany. Similar to ours, theirs was a crisis of life and death. Their leader stood up in parliament and gave courageous leadership. Last night, our president did not.

How will responsible South Africans respond in the face of this dilemma? We will, more than ever, do our part to make South Africa work. We will not be deterred from doing what we do well during this one life we are all afforded.