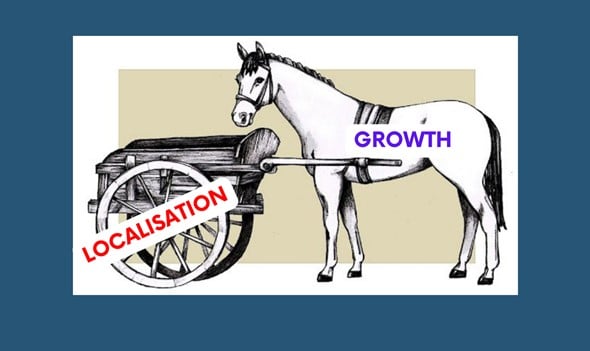 Trade, industry & competition minister Ebrahim Patel was in top form presenting the department’s 2022/2023 budget in parliament on Friday, declaring that the country needs to intensify industrialisation by spearheading transformation to build an inclusive economy, with the aim of creating opportunities for firms to grow.

I read the speech intently after spending two days facilitating the Mainstreaming the Steel Masterplan Conference at Emperors Palace this past week, where Patel was keynote speaker. After reading this column the organisers might have second thoughts about inviting me back.

The steel master plan has some redeeming features. For one, it’s not the Industrial Policy Action Plan concocted by Patel’s predecessor, that baggy-suited central planner Rob Davies. The master plan is well researched, with key inputs from industry. Supply-side constraints to growth such as Eskom and Transnet, and demand-side constraints such as the glacial rollout of infrastructure, are all there and ventilated.

But it doesn’t go far enough on the critical price issue. Basic steel prices have risen from under $300 a tonne in 2015 to about $900 a tonne recently. To create demand price is important. The market simply buys less steel since it has become so expensive.

But perhaps the biggest bugbear I came across from conversations with various players is that the master plan places considerable emphasis on localisation and equally on export promotion, particularly via the African Continental Free Trade Area opportunity. And it is this sort of muddled, wishful thinking, that somehow competing interests can be successfully managed from the centre, that is a feature of all of the master plans being churned out by Patel’s department.

We have among the most complex localisation rules in the world, which is deterring investment. A wandering albatross tells me that at the various international investment events he attends scouring for potential projects for SA fabricators, he continuously encounters foreign investors who sing from same hymn sheet: if they cannot have guaranteed full ownership and control over their investments they would rather go elsewhere where they can.

The steel master plan leans heavily on localisation enforcement, but the new preferential procurement draft document issued by the Treasury following the recent high court findings about BEE, seems to make this a pipe dream as well. Even before the ruling both Transnet and Eskom already had approved exemptions to not follow the previous preferential procurement rules.

The bottom line is that growth and transformation all depend on demand. Essentially, if an economy does not grow beyond 2% its steel industry will not grow. So the industry looks for growth offshore.

Meanwhile this government has been successful in destroying “concentration” in the civil construction industry after the 2010 World Cup, so much so that we have lost our main contractors that can compete for contracts in foreign markets. Basil Read, Group 5, Aveng, Grinaker LTA, M&R, all gone. WBHO is suffering down under, and with its cash tied up in Mozambique, will be off the scene for a while. Who is left? Maybe Teichmann, Redis and Raubex, but far fewer than before.

SA has been reduced to subcontracting work from foreign main contractors. I wonder if there’s a KPI for that inside the department of trade, industry & competition? My wandering albatross tells me he has now been approached in Houston by a major American company on the fabrication and installation of an enormous modernisation project involving moving a gas-to-diesel refinery from the US to Angola and upgrading it to a clean fuel refinery (what lies ahead of us in SA as the world looks to decarbonise).

We are talking a multibillion-dollar project. They will supply the oil and gas expertise and are looking for fabricators and manufacturers. The current decision is to do it in Angola (which is very expensive, I’m told), therefore as an alternative the company is investigating whether it would be better to fabricate in SA and erect in Angola. “Previously I would have approached a Group 5, M&R, and so on, but now have no main SA contractor to turn to.”

Considering that ArcelorMittal SA (Amsa) remains key to securing export work, and that my albatross tells me he is confident Amsa will supply at the “right” price should the work come in, I grudgingly commend the government for ensuring we have a primary producer in SA. Whether this was done in the most practical, efficient and fair manner is another story.

My albatross believes the wellspring of SA’s overall decline is to be found in the ANC’s transformation policies — well intended but after two decades in practical implementation a competent destroyer of private sector investment.

Ironically, SA’s economy will only return to the sort of growth needed to truly transform if the government rolls back its fixation on bureaucratically enforced localisation and transformation. While I agree with the need to create a more inclusive economy, like RMB CEO James Formby pleaded recently we need to stop putting the localisation cart before the priority growth projects horse.